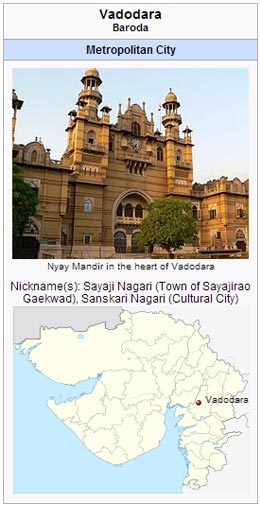 Modern Baroda is a great and fitting memorial to its late ruler, Sayaji Rao Gaekwad III (1875-1939 AD). It was the dream of this able administrator to make Baroda an educational, industrial and commercial centre and he ensured that his dream would come true.

Baroda is situated on the banks of the river Vishwamitri (whose name is derived from the great saint Rishi Vishwamitra). The city was once called Chandravati, after its ruler Raja Chandan, then Viravati, the abode of the brave, and then Vadpatra because of the abundance of banyan trees on the banks of the Vishwamitri. From Vadpatra it derived its present name Baroda or Vadodara.

Baroda has a rich historical background. The ardent historian can trace Baroda’s history over 2000 years and more. However, the recent threads can be picked up when the Moghul rule over the city came to an end in 1732, when Pilaji brought the Maratha activities in Southern Gujarat to a head and captured it. Except for a short break, Baroda continued to be in the hands of the Gaekwads from 1734 to 1949.

The greatest period in the Maratha rule of Baroda started with the accession of Maharaja Sayajirao III in 1875. It was an era of great progress and constructive achievements in all fields.

Maharaja Sayajirao was one of the foremost administrators and reformers of his times. He initiated a series of bold socio-economic reforms. He attached great importance to economic development and started a number of model industries to encourage initiative, and then handed back the working industries to private enterprise. He started model textile and tile factories. It is as a result of his policy of industrial development that Baroda is today one of the most important centers for textile, chemical and oil industries. He introduced a number of social reforms. In no department of administration has the far-sighted policy of this wise ruler been more conspicuous than in education, and in none have the results been more real and tangible. He boldly introduced compulsory primary education and a library movement (the first of its kind in India) to augment his adult education scheme.

It was he who visualized a general scheme of development in all branches of knowledge at different stages, with the Maharaja Sayajirao University of Baroda at the apex. Modern Baroda owes its beauty, its educational institutions and its masterpieces of architecture to the insight and vision of this great ruler.

There is a saying that nothing grows under the banyan tree, but this is not true of Baroda. Having witnessed the rise and fall of the empires and kingdoms of the Hindus, Pathans, Moghuls and Marathas, it now occupies a unique position on the educational, cultural and industrial map of India. Yet, it has been fortunate enough to retain the beauty of its rich and varied past. And it is one of the few cities in India which is still influenced by the lost might of its ruling dynasties.

Baroda is synonymous with education. The patronage of education started with Maharaja Sayajirao and the city has built further on the academic infrastructure established by him.

The present educational foundation rests on over 20 public schools and over 100 private schools. Towering benevolently over all is the Maharaja Sayajirao University, the jewel in the Baroda crown, so to speak. MSU is the only university in Gujarat with English as the medium of instruction. It has 13 faculties and 17 residential hostels, 4 of them for women students. The university caters to over 35,000 students.

The people of Baroda like to tell visitors that their city is a ‘Sanskari Nagari’, that is, a ‘cultured city’. By and large, the visitors agree. The city does indeed have rich cultural traditions. And today’s Barodians have quite a full and hectic cultural life throughout the year.

The outstanding trait about Baroda’s cultural life is that it is remarkably cosmopolitan. And while there are hundreds of different identities, everyone participates in all activities. So, the culture of the city is not just history or heritage; it is dynamic, ever- changing and alive.

Yes, Baroda is one of India’s most cosmopolitan cities. Thanks to the vision and broadmindedness of the Gaikwads, the subsequent industrialisation, the proliferation of academic activities and a strategically important geographical location, Baroda has welcomed a wide variety of people from all over India and also from all over the world.

More or less every Indian community has an active identity in this city. And this happy co-existence is reflected in the social and cultural life of the people. In all of this, the sprawling and cosmopolitan MS University campus and the large number of local, national and foreign industries act as a catalysing and unifying force.

The average Barodian is open to the world and overflowing with hospitality, as the history and growth of the city aptly testify.

If you want to see Baroda’s cultural enthusiasm, you should visit this city during any festive occasion like Navratri, Diwali, Ganesh Chaturthi, Id, New Year, Uttarayan, Holi, Campus Fun Fairs, etc. On any given day, some cultural activity or the other is going on in the city. Classical music and dance (Garba) have their patrons, and so does the modern stage and pop culture. The culture and the traditions are both alive and being forever experimented with.

Can you expect anything less from a city which is blessed by its geography and its history, which is the home of a vibrant internationally renowned university and which is a key component of India’s industrial base? The people of Baroda have not only hung on to the cultural heritage, they embellish it as they exuberantly go on with their daily lives.