Sayajirao was born at Kavlana, 10th March 1863 as Shrimant Gopalrao Gaekwad, second son of Meherban ShrimantKashirao Bhikajirao [Dada Sahib] Gaekwad. He was selected by the British Government as successor to Maharaja Malharrao Gaekwad and was accordingly adopted by Maharani Jamna Bai, on 27th May 1875. He ascended the gadi (throne) at Baroda, 16th June 1875 but being a minor reigned under a Council of Regency until he came of age and was invested with full ruling powers, 28th December 1881. During his minority he was extensively tutored in administrative skills by Raja Sir T. Madhava Rao who groomed his young protege into being a ruler with foresight and with a will to provide welfare to his people. In this period Sir T. Madhava Rao restored the State to its normal conditions from the chaos in which it was left by the predecessor of Sayajirao. Not a little credit for what the Maharaja achieved during his life in every sphere of human activity must be given to F. A. H. Elliot.The learning which Sayajirao acquired under Mr. Eliot's able guidance made him a great statesman, educator, and ruler. It is acknowledged that the Maharaja Sayajirao was a prince among the educators and an educator among the princes. He had to undergo such a heavy course of studies that it would have made many a student hate them. But it made him realize his shortcomings and strengthened his determination to acquire more knowledge. 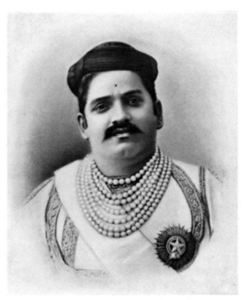 On assuming the reins of Government, some of his first tasks included education of his subjects, uplifting of the downtrodden, judicial, agricultural and social reforms, building a network of railways to connect areas of his dispersed territories. He played a key role in the development of Baroda's textile industry. His educational and social reforms included, along others, ban on child marriage, legislation of divorce, removal of untouchability, spread of education, development of Sanskrit and ideological studies, religious education, encouragement of fine arts. Fully aware of the fact that he was a Maratha ruler of Gujarat, he identified himself with the people and developed their cosmopolitan attitude and progressive, reformist zeal. His rich library became the nucleus of today's Central Library of Baroda with a network of libraries in all the towns and villages in his state. He was the first Indian Ruler to introduce, in 1906, compulsory and free primary education in his State, placing his territory far in advance of contemporary British India.

Though a prince of a native state, an admirer of the English people and in many respects of the English rule in India, he jealously guarded his rights and status even at the cost of annoyance to the British Indian Government. He was granted the title of Farzand-i-Khas-i-Daulat-i-Inglishia, 29th December 1876. He attended the Delhi Durbars of 1877, 1903, 1911. It was at the 1911 Delhi Durbar that Sir Sayajirao did not bow to the King Emperor and this was considered disrespect to the throne by the British who almost derecognised him and he almost lost his throne. Sayajirao was often in conflict with the British on matters of principle and governance, having continuous and longstanding verbal and written disputes with the British Residents.

It was during his reign that a large narrow gauge railway network was set up in Baroda State which even to this day is the largest narrow gauge railway network in the world with Dabhoi at its focal point. Sayajirao envisioned a water supply scheme for Baroda in 1892 at Ajwa which would supply drinking water to the people of Baroda by gravity. To this day a large portion of Vadodara City gets its drinking water from this source.

The large public park originally called Kamati Baug and now called Sayaji Baug were his gift to the City of Baroda. On the occasion of his Diamond Jubilee of accession to the throne, he set apart large funds out of his personal as well as the state funds for setting up a University in Baroda for the benefit of students from the rural areas of his state...... a task which was ultimately completed by his grandson Sir Pratapsinghrao Gaekwad who founded the Maharaja Sayajirao University and settled the trust as desired by his grandfather. This Trust known as Sir Sayajirao Diamond Jubilee and Memorial Trust exists today also and caters to the educational and other needs of the people of the former state of Baroda.